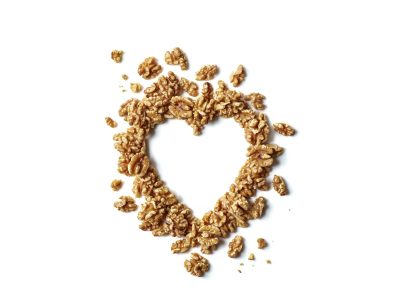 A new clinical trial reveals there may be a connection between heart and gut health aided by consumption of walnuts.1

A new clinical trial reveals there may be a connection between heart and gut health aided by consumption of walnuts.1 Findings from this new study, published in the Journal of Nutrition, show that consuming walnuts enriches certain gut bacteria in the digestive system associated with improvements in blood pressure and cholesterol. Researchers believe this could be due to the unique combination of bioactive compounds, fatty acids and dietary fibre found in walnuts.2

In this new trial conducted at The Pennsylvania State University and Juniata College, study participants included 42 overweight or obese (BMI: 25.0 – 39.9 kg/m2) individuals aged 30-65 and at risk for heart disease. Participants first followed an average American diet (48% carbohydrate, 17% protein, 35% fat, 7% saturated fat) for two weeks to be sure that everyone started at the same baseline. They were then randomly assigned to a diet that replaced some saturated fat with either walnuts, a vegetable oil blend that included the same fatty acids as walnuts (including omega-3 ALA, a type of polyunsaturated fat), or a vegetable oil blend that was higher in omega-9 oleic acid (a type of monounsatured fat). These diets were designed to understand if the good, unsaturated fats in walnuts are responsible for benefits or if other nutrients found in whole walnuts, such as bioactive compounds and fiber, may be playing an additional role. All participants followed each diet for six weeks with a break (average of 22.8 days) in between each intervention. Standard markers of heart health, such as blood pressure and cholesterol, as well as the microorganisms living in the digestive tracts of the participants were assessed before and after each of the diets.

Individuals who consumed walnuts and the vegetable oil with the same fatty acid profile as walnuts showed positive shifts in gut bacteria compared to the average American diet, suggesting a positive impact of omega-3 ALA. Those following the walnut diet only, had a unique enrichment of a particular species of bacteria – one that plays an important role in metabolizing ellagitannins, a bioactive component of walnuts that may be associated with cardiovascular benefits. The types of fatty acids in walnuts and vegetable oil may positively impact gut health, but this study also suggests there are benefits in consuming a whole walnut.

As with any scientific research, some study limitations should be considered. The study did not evaluate secondary metabolites, which can be used to assess the functional capacity of gut bacteria, nor did it assess the conversion of ALA to EPA, which could impact the gut microbiota as well. Additionally, fecal samples may not be representative of the entire gut environment, which is highly variable among individuals depending on diet, medications, lifestyle and other factors. For these reasons, larger and longer-term studies are needed to clarify these effects in a broader population.

2 California Walnuts are the only tree nut to contain a significant amount of the plant-based omega-3, alpha-linolenic acid (ALA), 2.7g/ 30g (approx. a handful). 30g of walnuts also offers 4.4g of protein and 1.4g of fibre. (Food Standards Agency (2002), McCance & Widdowson’s The Composition of Foods, Seventh summary edition. Cambridge: Royal Society of Chemistry.)

I confirm that I AM A HEALTHCARE PROFESSIONAL and therefore eligible to view this section of the website. If you are NOT a Healthcare Professional, please click here.