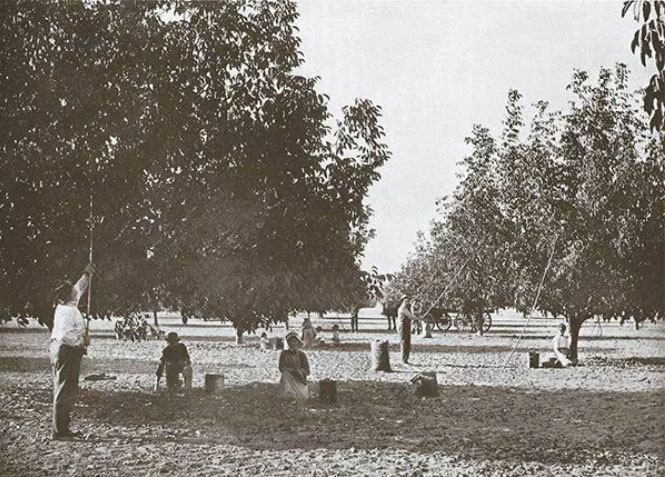 The History of California Walnuts

Read about their origins in ancient Persia… why they became known as ‘English Walnuts’… and how California became a centre for walnut cultivation – involving one of the most dramatic horticultural moves in history!

Walnuts are the oldest tree food known to man, dating back to around 7000 B.C. The Romans called walnuts Juglans regia, “Jupiter’s royal acorn.” Early history indicates that English walnuts came from ancient Persia, where they were reserved for royalty. Thus, the walnut is often referred to as the “Persian Walnut.” Walnuts were traded along the Silk Road route between Asia and the Middle East. Caravans carried walnuts to far off lands and eventually through sea trade, spreading their popularity of the walnut around the world. The outer shell provided a natural protective layer helping to maintain the quality of each nut. From the 17th century, English merchant marines transported the product for trade to ports around the world, including the Americas and they became known as “English Walnuts.”

The walnut was first cultivated in California by Franciscan Fathers in the late 1700s. The earliest walnuts to enter California were known as “mission” walnuts and unlike today’s walnuts, they were small with harder shells. The trees flourished in the sub-tropical climate of California and by the mid-1800’s, modern walnut production had begun.

The first commercial plantings began in 1867 when Joseph Sexton, an orchardist and nurseryman in the Santa Barbara County town of Goleta, planted English walnuts. For several years, walnuts were predominantly planted in the southern areas of California, accounting for 65% of all bearing acreage. Some 70 years after Sexton’s original plantings, the centre of California Walnut production had moved northward to California’s Central Valley in one of the most dramatic horticultural moves in history. Better growing areas, improved irrigation, and better pest control methods in the north resulted in greater yields, which gradually increased each year.

Today, the Central Valley of California is the state’s prime agricultural region growing many types of crops including walnuts. In fact, the Central Valley accounts for 99% of the commercial US supply. Its mild climate and deep fertile soils provide ideal growing conditions resulting in exceptional California Walnuts.

SIGN UP FOR OUR NEWSLETTER TO RECEIVE EXCLUSIVE RECIPES, TIPS, AND MORE.